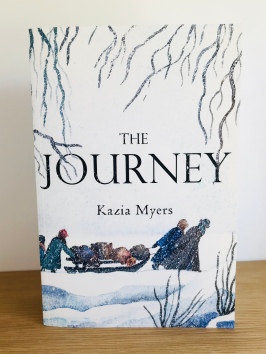 The Journey is available as a Kindle Edition. Click here to purchase a copy.

‘The Journey’ is a novel in three volumes set against the backdrop of World War 2. It is a story of unimaginable deprivation and survival, love and loss, of friendships forged through most challenging experiences.

On the memorable night of 10th February 1940, Julian Kalinski (29), his wife Anastazia (26) and their baby daughter are taken from their home in Poland by the Russian soldiers, packed on a cattle train and with thousands of families sent to Stalin’s labour camps in Siberia. Two years later, on liberation, only the strongest have survived the arctic cold, the starvation and the inhuman treatment by their captors.

While Julian joins the forming Anders’ Army that is sent to Europe to fight Hitler’s forces, Anastazia, with hundreds of Polish women, their children and orphans, is transported to the safety of the British colonies. Before Anastazia and her friend Eva escape the “paradise” of the Soviet Union, Eva is subjected to unspeakable degradation that remains a binding secret between the two friends forever. Their hopes of returning home are dashed by the Treaty of Yalta (February 1945), when Poland is sacrificed to Stalin’s demands. Thousands of displaced Poles settle in England.

In 1960, Julia (Anastazia and Julian’s daughter) is an impressionable sixteen-year-old dreaming of an exciting, adult future. Her mother’s progressive illness forces her to tackle unfamiliar and daunting challenges. Her parents’ past still has the power to cast long and haunting shadows. After her eighteenth birthday Julia, with her friend Miro, embarks on a visit to Poland in order to find answers to questions that trouble her mind. A miraculous discovery brings the fragmented family together and also their very long journey to a bitter-sweet end.

Here are some of the reviews:

I highly recommend this book

I could not put it down. It is the story of my parents and grandmother and many other Polish families who were sent to Siberia by the Russians and then released when Germany attacked Russia. I could not put the book down. It describes the terrible circumstances which they had to endure and ther remarkable courage to survive. The Poles went on to join the allies and start a new life in countries throughout the world.

I would also highly recommend Stolen Years by the same author which tells the story of another group of Poles who were forced to work as slave labour in Germany. Thank you for telling their story.

This book is amazing

It tells the story of the sufferings of Polish people taken from their homes and transported to Russian labour camps. Despite the heavy subject matter, the novel comes across as a chronicle not only of the inhumane treatment of these people, but also their ability to face adversity and come out the other side. Kazia writes with humour as well as compassion. I think it’s a really important book because these people deserve to have their story told.