My generation of Polish children, born during or just after the war, was brought up on our parents’ stories of their dramatic wartime experiences.

As I child, I was unable to comprehend exactly what those stories meant in reality. I didn’t understand the horrors they had experienced in their recent past.

When I grew up, like most people intending to record their family’s history, I had often thought of doing the same, but professional work and family commitments always got in the way of a long-term project.

My retirement coincided with my mother-in-law Anna’s failing health and so I began to visit her frequently. She reminisced about her childhood in Poland, and about her youth stolen from her by the invading Germans, when she was sent by them to slave-labour at an Austrian farm. The story that emerged was so powerful, it had to be written down.

It took me two years to write it as a novel, Stolen Years, with young Anna (17) and Michal (22) as the main characters. All other characters were created around the names she mentioned to me and the plot was based on true facts.

I followed ‘Stolen Years’ with writing ‘The Journey’, based on my own parents’ wartime experiences, when they were taken by the Russians in 1940, and with thousands of Polish civilians sent to camps of hard labour in Siberia.

The novel maps out Anastazia’s (26) and Julian’s (29) epic odyssey across Siberia, Uzbekistan, Kazakhstan, Persia, Palestine, Italy – to their arrival in England in 1948. For political reasons their history was suppressed at the time and left untold throughout the communist times in Poland until recently.

For me it became very important to tell their story before it got buried and forgotten once my generation was gone. 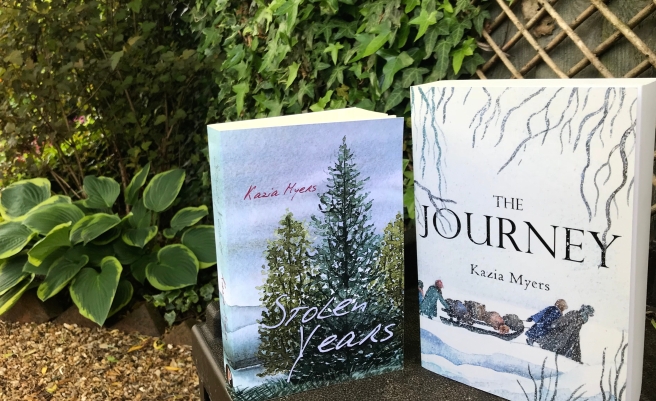 Both books are currently available as Kindle versions. Please click on the book titles below to purchase a copy:

We are also currently working with the publishers to get both books re-printed in paperback form.

View all posts by Kazia Myers